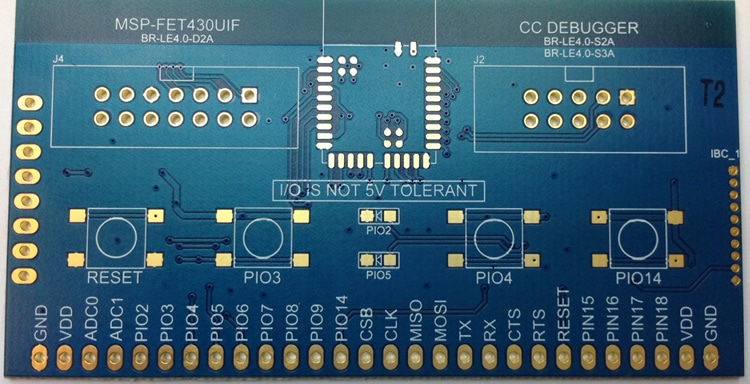 I’ve had some fun playing around with Bluegiga’s BLE112 Bluetooth module, but along the way, I’ve found several problems with it (refer to this post, this post, and this post for examples). Unfortunately, for my specific application, these problems are deal-breakers.

The biggest problem for me is that the software I2C interface on the BLE112 is just really not up to the challenge of any non-trivial application. After speaking with Bluegiga people, it looks like the solution is to wait for the BLE113 to come out, which is based on the TI CC2541 chip. This means that it will come with a hardware I2C interface (sweet!), eliminating the timing issues I’ve been having so far (full example here).

The unfortunate downside is that, while samples will be coming out soon, full production begins some months down the road (damn!). This timeline doesn’t really match up well with my slightly tighter timelines, so I’ve spent the past week or two looking up equivalent modules from other companies.

Instead of going through the alternatives, I’ll refer to this very well done explanation of BLE modules on the market. It’s a year and a bit old, but it’s still surprisingly relevant.

As the title of this post suggests, I’ve decided on the BlueRadios BR-LE-4.0-S3A module to replace the BLE112 in my application.

The S3 is based on the CC2541, so the I2C isn’t a problem, it seems to have a good API and software stack, and it is a turnkey Bluetooth solution (which is important to me for quick turnaround). An unfortunate point is that I need to purchase that damn IAR compiler (about $3k) if I want to write any custom code (which I do). The silver lining is that apparently BlueRadios worked out a deal where the compiler is only $1k if you buy BlueRadios products.

I wasn’t a big fan of the BGScript interpreter on the BLE112… It incurred a lot of overhead, and it was rather limiting to write in. However, whatever bad things I have to say about BGScript are negated by the fact that it is FREE! I also know that Bluegiga is working on a C compiler for their BLE chips, but again, it won’t be ready in time. Sigh.

One HUGE plus for Bluegiga over its competitors is their “customer service”. I put that in quotes, because I’m not referring to a customer service department, but rather that every communication I had with anyone from the company was excellent. Professional, cordial, helpful, etc… I can’t heap enough praise on their people… I cannot (and will not) say the same about the other BLE module manufacturers that I’ve emailed or called so far.

So, my hope is that after this current project is over, I’ll have another one that will allow me to come back and test-drive the BLE113 and C compiler that Bluegiga will hopefully have released by then.

Otherwise, if anyone has any experience with the BlueRadios offerings (BR-LE-4.0-S2A or BR-LE-4.0-S3A), I would love to hear from you and discuss those modules. There isn’t much literature on the interwebs about them, so I’m whipping up a breakout board so that I can play around with them (side note: my first PCB layout experience!).