Productivity Chaining Together a Morning Routine

Similar to Tiny Habits, 4 years ago, I began experimenting with a productivity/goal-reaching technique called “Don’t Break the Chain” attributed to comedian Jerry Seinfeld. This time, I’m using it to develop a morning routine. I’ve already explained it before , but simply stated:

The following image from the “Don’t Break the Chain” iOS app by ROUGE41 (I’ve never used this app, I just like the simplicity of this image) explains the aforementioned steps. 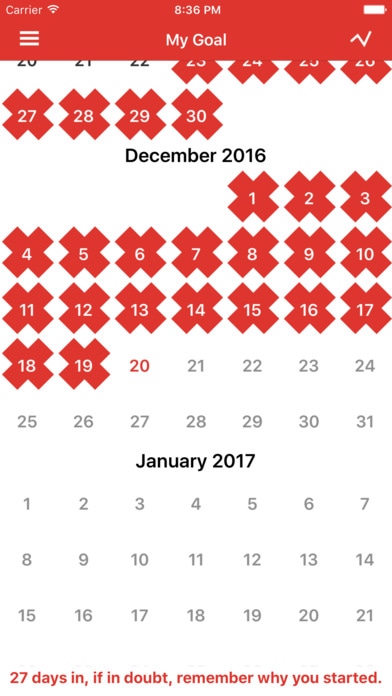 There it is, pretty clean, pretty simple, pretty effective.

Back in the day, I ended up creating 5 ‘categories’ of chains, and was able to keep those chains going (without too many screw-ups) for about 6 months, but it was very difficult - because as with my habits, I was traveling around a lot and couldn’t get a rhythm going.

They all fell by the wayside when I started my first startup (while still having my primary salaried job) - due to lack of time, lack of energy, and just lack of brain space by that point.

I had very good adherence with ‘Don’t Break the Chain’ - so I’m currently using it again. Specifically, a Chain related to maintaining a morning routine. A morning routine is something I’ve never ever had - so I really need to work on it.

I haven’t quite figured out the way to track my chain, as currently, I’m just using my whiteboard with some 60 boxes on it related to the days. I don’t think this is a good way to adhere, as when I’m not physically at home, I don’t have the constant visual reminder (but when I am home, it’s great).

An app-based approach might be good, but I would need it to send me notifications after 12pm reminding me to do my morning routine if I had forgotten. Alternatively, my previous idea of a live wallpaper for a desktop or phone… That one is still good, and I’d like to find something like it.

A morning routine is a series of actions/events that one would do ‘routinely’ in the morning after waking up… So, in other words, it’s exactly as it sounds.

Here’s how my morning routine has looked for the past 5 years:

My New and Improved Morning Routine

This isn’t completely hammered out yet, but my morning routine is built around my 2017 health-first initiative, chaining a few Tiny Habits with a thorough understanding of my productivity killers.

An example morning routine (for me) would go as follows:

I’ve made some simple annotations in each of those bullets, but the key takeaways are the following:

That might look like a long routine, but before I check email, I’ve only spent about an hour (assuming I workout for 30 minutes).

I used 12pm specifically, because I’ve never been a morning person. Like… Ever. I recall when I was in elementary school, I would always stay awake past midnight because I couldn’t fall asleep, I always had a hard time waking up early (regardless of bed time), and I hated morning tests/exams for my entire life, because my brain didn’t turn on until after noon.

This way, I now schedule all my meetings and associated ‘work’ until after 12pm, so I can actually be useful for them. I’ve scheduled miscellaneous hours (if any) before noon to be used for things like writing this blog, programming for open-source code, working on side projects, or just generally anything I don’t get paid to do.

That’s all for now. Next time, I’ll go over some of the high-tech and super primitive tools I use to adhere to my new habits and maintain my morning schedule.